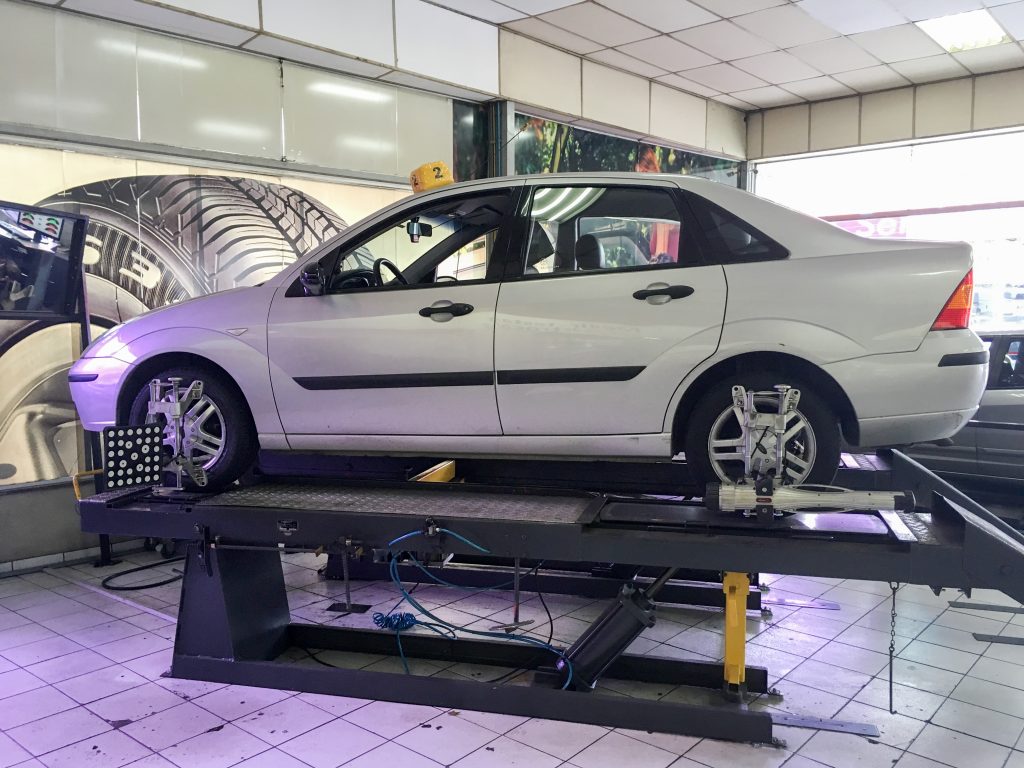 It is measured independently for front and rear wheels. It is expressed in degrees or millimeters, and generally represents a difference between 0.2 and 1.5 mm per wheel (obtained by subtracting the difference between the front of the two wheels from the distance between the rear of the two wheels). Even if the measurement seems low, this is an adjustment not to be ignored since it can lead to pronounced mechanical stresses, rolling discomfort, and asymmetric tire wear.

Note: deviations in alignment can be checked by hand with a string encircling the four tires. Professionals use pre-calibrated benches or laser beam meters.

On independent suspensions, it is quite possible to have an alignment asymmetry between two wheels on the same axle.

While this may be voluntary for a competition car, it is a matter of mechanical wear and tear to be corrected on a vehicle of common use.

Settings and Constraints of an Alignment

In general, a neutral alignment would see the four wheels parallel to each other. This adjustment does not lose any power or cause premature mechanical (or pneumatic) wear:

On a pinched alignment (positive), the two wheels force each other and thus wear the tire on the outside.

An open parallelism (negative) causes the wheels to pull away from each other and wears out the inside of the tires.

Alignment on the Front Wheels

It gives more stability at high speeds but makes the vehicle less directional.

It also puts more stress on the steering mechanism (hinges and rack).

Pinching the rear wheels gives even more stability but may favor under-steering (front of the vehicle that is slipping), especially if coupled with a pinched front parallelism.

Opening the rear wheel alignment gives more agility but makes the vehicle oversteer (the rear of the vehicle skids).

Difference Between Traction and Propulsion

As a reminder, a traction is a vehicle whose drive wheels are at the front while they are at the rear for propulsion:

In both cases, at acceleration, the drive wheels will tend to pinch (due to the torque pulling the wheels forward while they are held by the suspension arms).

The non-driven wheels of a rear-wheel-drive system have a relatively neutral behavior.

The non-driven wheels of a propulsion system, at the front, undergo much more load transfers and will tend to open up during acceleration.

In addition to being relieved at acceleration, the front of a propulsion system will be made very directional but relatively unstable; unlike the rear of a traction system, which receives more load at acceleration and therefore more grip.

Car Alignment: A Notion of Compromise

For all these reasons, common settings have been established on consumer vehicles to correct the characteristics inherent in each technology.

In this way, a vehicle will have as neutral an alignment as possible when driving. However, each correction has its drawbacks; there is no perfect choice:

For traction, a slightly open alignment at the front helps to counter the tendency to accelerate. It makes the vehicle more directional, which is necessary due to the overweight of the engine and transmission at the front. At the rear, the wheels are slightly pinched for more stability.

For propulsion, it is a question of countering the effects of acceleration: the rear will be open, the front slightly pinched to maintain stability during braking.

A 4-wheel drive vehicle has the properties of both types (propulsion and traction), but the settings can be very different due to the possible uses (city, road or crossing). These specificities will have to be taken into account because although they have the same transmission scheme, an SUV will have a very different setting from a supersport GT. It is then necessary to refer to the manufacturer’s data.

Good to know: beyond these characteristics, be aware that the alignment must also be modified due to other geometry adjustments – in particular, camber (which is not an adjustment accessible to all vehicles, however).

Bad Alignment on a Car

The difference in alignment is subtle in conventional vehicle use. Behavioral changes can, unlike use on a race track, go completely unnoticed.

Causes of Bad Alignment of a Car

Beyond the wear and tear of the suspension and steering structures, the alignment of an axle can be altered by these events:

the difference in inflation between the two tires on the same axle (changing the suspension geometry);

Car Alignment: What Are the Consequences?

In the short term, the asymmetry of alignment can cause an increase in fuel consumption, inconveniences in the direction such as the feeling of being carried to the right or left (the car is said to “pull” to the side), the steering wheel can move from its neutral horizontal position while you drive straight, or the vehicle no longer corresponds to your daily driving habits.

In the long term, tires will wear faster and asymmetrically, mechanical ground connection and steering components will be subjected to additional stress and will, therefore, last less than expected.

In any case, the long-term effects here are mechanical repercussions that are relatively difficult to quantify except for tires. Their premature wear can be as high as 20 or 30%, meaning that a tire can reach its legal limit on an outer or inner tread while the rest of the structure is only two-thirds worn.

For all these reasons, it is advisable to regularly check the parallelism as well as the overall geometry (if the vehicle allows it) with a professional. The road worthiness test is a good reminder, but do not hesitate to do it proactively after a major impact on one of the axles or if your vehicle behaves in an unusual way.

One thought on “What is Car Alignment”