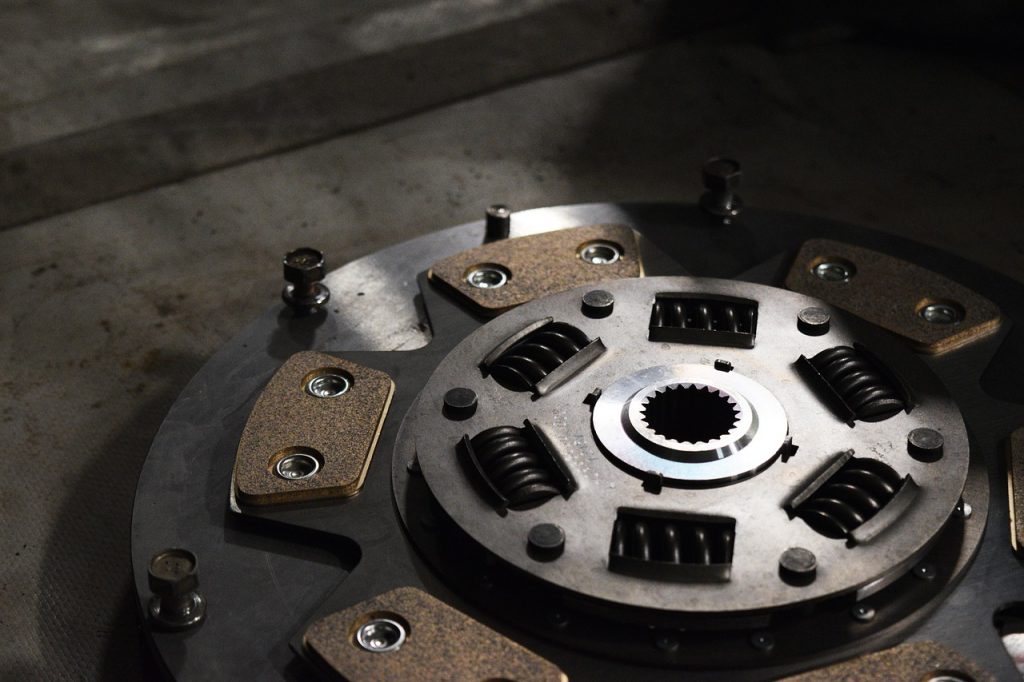 – What is a flywheel?

The flywheel is an automotive part that performs several essential functions within a car’s engine. Over the years, car performance improvement has necessitated changes to enable it to keep up with the dual mass flywheel’s appearance. In the car maintenance industry, the dual mass flywheel has a reputation for reliability problems.

What is a flywheel?

The flywheel is a heavy part (5 to 10 kg) in the shape of a disc made of cast iron with a toothed ring around its circumference.

It is placed at the engine output before the clutch. It is fixed to the crankshaft by a screw to transmit the rotation movement to it.

Good to know: the shrink disc is fixed to the flywheel by a tight fit, i.e. it is heated during assembly. Its diameter shrinks as it cools, thus holding it tightly to the flywheel.

Role of the flywheel

– Transmission: this is its primary function. It transmits the rotational movement of the engine to the wheels, the clutch and the gearbox.

– The clutch plate is fixed to the flywheel by a screw and holds the clutch friction disc on its outer surface. Also, a bearing or ring in the center of the plate often guides the “tail pinion,” the end of the primary gearbox shaft.

– Engine rotation regulation: engine combustions are cyclic; for a 4-cylinder engine, they occur every 180°, creating irregularities and jolts in operation. The flywheel, through its weight and speed of rotation, smoothes and regulates these engine jolts. Without it, while acceleration would be much faster, engine idle would be unstable and prone to stalling.

– Starting: The flywheel ring gear has teeth that allow the starter motor to be geared and drive the engine when starting.

Good to know: the flywheel can also have another row of teeth around its circumference: these are a necessary target for the speed sensor to determine the TDC (Top Dead Center) and the engine speed.

Modern, high-performance diesel engines put a lot of strain on transmission components due to their engine torque. The manufacturers ‘ solution is the dual mass flywheel to support these additional constraints and avoid making the flywheels heavier.

Schematically, the flywheel is made up of two discs joined by shock-absorbing springs that cancel out transmission jolts.

This technology has been the source of serious reliability problems: after 80,000 km, the degradation of the dual mass flywheel damping system has led to costly repairs, which are difficult for the manufacturers to pay for.

If the practical solution was to replace it with a conventional flywheel at first, today, the reliability of the dual mass flywheel seems to be much better.

Good to know: transmission jerks and engine slamming are the warning signs of a faulty flywheel. In the worst case, it can lead to engine destruction.

The flywheel is maintenance-free, but it can be damaged by:

– Clutch wear: a worn clutch disc causes marks on the flywheel surface. It is possible to replace the flywheel or to grind its surface, thanks to machining.

– Starter: Although less frequently, the gear ring can be damaged by the starter pinion. Most of the time, you can replace this part independently of the flywheel.

Here is an average sample of the prices charged:

Good to know: these prices do not include labour for removal and installation (the engine and the gearbox must be decoupled); the cost varies too much according to the manufacturers and the vehicle models.